The 2022 WISe.ART NFT AWARDS will be Announced at the WISeKey Davos Event on May 25

These awards will recognize, celebrate, showcase and promote the most outstanding NFT artworks, projects and concepts and connect their outstanding creativity and artwork with investors, patrons, and collectors from all over the world. 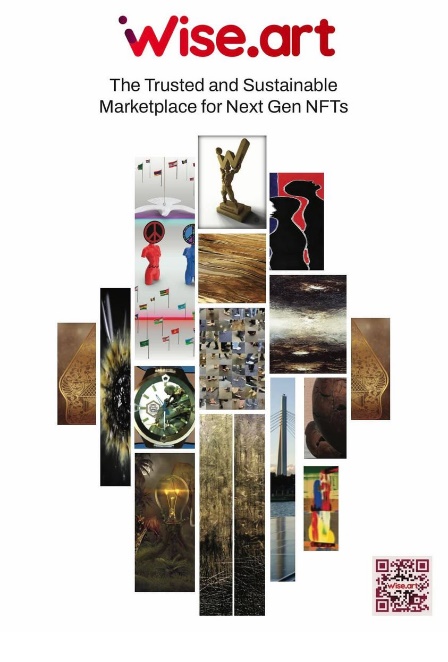 Geneva – May 6, 2022 – WISeKey International Holding Ltd. (“WISeKey”) (SIX: WIHN, NASDAQ: WKEY), a leading global cybersecurity, AI, Blockchain and IoT company, today announced the WISe.ART NFT AWARDS 2022. Since 2007, WISeKey has been organizing annual gatherings in Davos, fostering the dialogue about the future of technology with industry experts. This year WISeKey will present the awards to individuals who have made great impact globally to the development of NFT industry in the past year.

The WISe.ART NFT platform is secured by WISeKey’s various security technologies enabling the authentication of digital identity based NFTs, physical objects as well as digital assets, in a safe end-to-end process. The user is in full control of its WISeID NFT and other NFTs need to request access to its identity information so WISeID NFTs users can decide by themselves what level of information they wish to share, thus keeping full control. The WISeKey approach to the Metaverse has as objective to provide safe infrastructure identity services based on blockchain technologies for a wide range of users, including individuals, corporations, and government institutions.

As our digital lives become increasingly digitalized, Metaverse will leverage the advantages of the internet to establish a virtual world for its users. Businesses and communities will depend on users’ digital identities to manage assets. As interest in NFTs continues to accelerate, WISeKey is committed to promoting a more environmentally friendly consumption and distribution model.

Gunter Pauli, Director, ZERI and initiator of the blue economy concept for the first ever-sustainable NFT project using the Porrima.CH solar panels installed in 2010.
Using limited resources effectively is the core philosophy underpinning the Porrima, a concept boat centered on environmental research, which aims to show how sustainable technology could revolutionize the shipping industry.Each solar panel is encased in a special cover that protects the panels from sea water. There are 800 panels only – and these are the ones that undertook the world’s first tour around the world using only solar energy. WISeKey and Porrima.CH are seeking to share this incredible solar project with the growing number of sustainability enthusiasts on Web3 as a way to engage with new audiences around renewable energy, environment and tokenization technology.

Fernando Fitz-James, Vice President Fundación Casa de Alba & Duke of Huéscar for :his contribution to the NFT digital transformation.
Casa de Alba Foundation to begin its digital transformation by bringing prestigious private collections to the field of NFTs presented on the new entrusted WISeKey WISe.ART NFT platform. This new venture from Casa de Alba Foundation will commence with one of Christoph Columbus’s letters, part of the Foundation’s collection appraised at over one hundred million dollars by Christie’s. The Casa de Alba Foundation, based in the Palacio de Liria in Madrid, is the owner of invaluable and best private collections of cultural heritage art, preserved in more than twenty palaces and castles scattered throughout the Spanish geography, some of which are ceded to public institutions for better conservation and use. Throughout history, its prevailing position has allowed Casa de Alba Foundation to interact with the best in the world of Spanish arts and letters.

Archduke Andrés Salvador Habsburgo-Lorena, recognized as a scientist to the study of aquaculture in temperate inland waters.
With the change of the Water Law of 1972, he was able to establish an astaculture center in Isla Mayor, which has become a total of five today. Rice polyculture has been created and has given jobs to industrial fishermen in the processing of crab from the Marismas. His research will be presented as NFT on WISe.ART and is awarded as a world-renowned thinker, humanist, scientist, aqua-culturist, and is the Chairman of the María Nobrega International Foundation, based in Bagno di Ripoli, Italy, the ITKI Foundation, Austria, and other institutions, and Dean of the Austrian Golden Fleece. The Archduke Andrés Salvador Habsburgo-Lorena and Salm Salm (Persenbourg, Austria, 1936) is Emeritus of the International Order of Saint Hubertus.

Pedro Sandoval, for his contribution to NFTs as a worldwide renowned Artist moving art to the Metaverse.
Born in Venezuela in 1968 and currently based in Spain, the name of Pedro Sandoval is currently closely associated with the abstract neo-expressionist movement and is the creator of the PENTA-ABSTRACTIONISM movement worldwide. At the age of six he has won the triennial of contemporary art in the city of Osaka in Japan. The artist has a close relationship with Andy Warhol and also with his friend Gianni Versace. He has also been a disciple of Jesús Soto and has been the favorite artist for years of Sofía Inver, founder of the Caracas Museum of Contemporary Art, and of Leo Castelli, one of the best gallery owners. of the world currently the president of the proarte group worldwide. Today the works of Pedro Sandoval can be found in different museums around the world, as well as in large collections such as the White House, the Vatican Museums, the Kennedy family, the Thyssen-Bornemisza family, among others. The only artist in the world who has won the Florence Biennale twice in 2015 and 2019, apart from everything he has been decorated in several countries around the world with different awards and many prizes.

Wang Wei, China Metaverse, Founding Chairman of China Mergers and Acquisitions Association (CMAA).
Wang Wei is the Founding Chairman of China Mergers and Acquisitions Association (CMAA) and serves as the Chairman of China M&A Group.  During his career, Mr. Wang has organized and supervised IPO underwritings of over 40 Chinese companies in domestic and overseas markets, and has provided guidance and advisory services on restructuring, financing, and M&A activities to many other leading companies in China. He has worked for a number of international corporations, including Nomura Securities Co., Ltd. in Tokyo, the World Bank in Washington D.C. and the Chase Bank in New York.  He serves as economic advisor in several ministerial and provincial governments in China, as well as independent director for several public companies.

Mr. Wang received his bachelor’s degree in accounting and master’s degree in finance in China, and a Ph.D. in economics from Fordham University in the United States. He has authored several books and journal articles, and is a frequent lecturer at universities in China, including CEIBS and Cheung Kong Graduate School of Business. Mr. Wang has received several awards including: “Top Five Chinese Investment Bankers” by Talents magazine, “The Most Influential Independent Director” by Directors & Boards magazine, and “The Most Influential Investment Banker” by China Finance Network.  He received the 2012 Lifetime Achievement Award from The M&A Advisor in New York, the 2013 Social Innovator Award from The Wall Street Journal, and the 2015 IFFM Financial Literacy Award. Mr. Wang has been a member of Shanghai Stock Exchange Corporate Governance Advisory Committee since 2007. He founded the Chinese Museum of Finance (Group) in 2010, an organization that currently runs 6 museums in Beijing, Shanghai, Tianjin, Shenyang and Suzhou.   He was elected Chairman of Asia Mergers & Acquisitions Association (AMAA) and Co-chairman of International Federation of Finance Museums (IFFM) in November 2015. In January 2017, he became a director of the Board of the Global Blockchain Business Council (GBBC), founded by 25 countries. Juan Antonio March Pujol, President Fundacion Onuart for his cintribution to NFT for Humanitarian causes. – 2019 President Fundacion Onuart – 2013 – 2019 Member of The International Advisory Board of Abertis – 2011 Partner of Council at ECIJA Law Firm – 2007 – 2011 Ambassador of Spain in the Russian Federation – 2007 – 2011 Ambassador of Spain in Turkmenistan – 2007 – 2011 Ambassador of Spain in Uzbekistan – 2007 – 2011 Ambassador of Spain in Belarus – 2007 – 2011 Ambassador of Spain in Armenia – 2004 – 2007 Ambassador of Spain to the U.N. in Geneva – 2004 – 2007 Ambassador of Spain to the World Trade Organization (WTO) in Geneva – 2007 – 2007 President of the Disarmament Conference in Geneva – 2007- 2007 Chairman of the Council of the International Migration Organization in Geneva – 2006- 2007 Chairman of the Finance Committee of the World Trade Organization (WTO) – 2001– 2004 Political Counselor at the Spanish Embassy in Mexico – 1996 – 2001 Political Counselor at the Spanish Embassy in the United Kingdom (UK) – 1995 Representative of Spain in the Development Assistance Committee of the Iberoamerican Conference.

About WISe.ART
WISe.Art is a fully-fledged marketplace. It can connect all actors of the arts industry. Our white-labeling options and special NFT designs ensure that besides an authenticated and signed version of the actual digital asset, creating an irreversible link to the physical object, providing proof of ownership, provenance, and a set of smart contracts describing future use and monetization streams. The WISe.Art NFT platform is fully secured by WISeKey’s innovative security technologies enabling the authentication of digital assets, in a safe end-to-end process based on our experience and proven expertise in this domain.

WISeKey (NASDAQ: WKEY; SIX Swiss Exchange: WIHN) is a leading global cybersecurity company currently deploying large scale digital identity ecosystems for people and objects using Blockchain, AI and IoT respecting the Human as the Fulcrum of the Internet. WISeKey microprocessors secure the pervasive computing shaping today’s Internet of Everything. WISeKey IoT has an install base of over 1.6 billion microchips in virtually all IoT sectors (connected cars, smart cities, drones, agricultural sensors, anti-counterfeiting, smart lighting, servers, computers, mobile phones, crypto tokens etc.). WISeKey is uniquely positioned to be at the edge of IoT as our semiconductors produce a huge amount of Big Data that, when analyzed with Artificial Intelligence (AI), can help industrial applications to predict the failure of their equipment before it happens.

This communication expressly or implicitly contains certain forward-looking statements concerning WISeKey International Holding Ltd and its business. Such statements involve certain known and unknown risks, uncertainties and other factors, which could cause the actual results, financial condition, performance or achievements of WISeKey International Holding Ltd to be materially different from any future results, performance or achievements expressed or implied by such forward-looking statements. WISeKey International Holding Ltd is providing this communication as of this date and does not undertake to update any forward-looking statements contained herein as a result of new information, future events or otherwise.
This press release does not constitute an offer to sell, or a solicitation of an offer to buy, any securities, and it does not constitute an offering prospectus within the meaning of article 652a or article 1156 of the Swiss Code of Obligations or a listing prospectus within the meaning of the listing rules of the SIX Swiss Exchange. Investors must rely on their own evaluation of WISeKey and its securities, including the merits and risks involved. Nothing contained herein is, or shall be relied on as, a promise or representation as to the future performance of WISeKey. 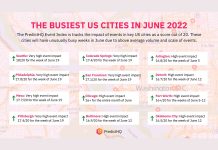 Seattle, Chicago, Philadelphia and 9 more cities set for huge demand surges due to events in June 2022