Westford, USA, Sept. 21, 2022 (GLOBE NEWSWIRE) — As nations around the world continue to face challenging battles, there is an increasing demand for military robots market to help carry out combat tasks. Robotic technology has come a long way in recent years, and now machines are able to complete many of the same tasks as humans. This technology has a number of benefits, including reducing injuries and fatalities. In addition, these machines are much cheaper to operate than human beings and can work in dangerous environments. Military robotics is also becoming more advanced, with machines being able to recognize objects and perform complex tasks.

The increasing demand for military robots market is causing a lot of companies to invest in the development of these machines. This will likely result in a significant increase in their prices, but this is not deterring buyers. The military has already recognized the benefits of using robots and their importance in combat operations. As a result, many countries are investing in the development of these machines.

This is especially true in Asia, where countries like China, Pakistan, and Japan are known for their aggressive behavior. There are also many private companies in the military robots market that are interested in developing military robots. This is likely because they realize the importance of these machines and the possibilities they offer.  As per SkyQuest study, over $2 trillion were spent on defense budget in 2021, which was the highest as compared to the past. Wherein, top 5 countries namely the US, China, India, Russia, and UK spent more than $1.22 trillion. However, the US is leading the market with over $778 billion spending on the military and defense spending.

Military robotics technology is being improved all the time, and this will likely continue for the foreseeable future. As a result, buyers should expect to pay more for military robots in the future, but this will be well worth it due to their advantages over human soldiers.

Get sample copy of this report:

With the development of artificial intelligence (AI), there is a growing interest in using robots for defense purposes. One of the most notable areas where AI is being used to improve defense mechanisms is with the development of autonomous intelligent systems (AIS). These systems are designed to autonomously conduct military missions without human input or supervision.

One of the biggest benefits to using AIS in the global military robots market is that they are able to operate in complex and dangerous environments with minimal human interference. This can be critical in situations where humans are either unable or unwilling to participate. Additionally, AIS can be more accurate and efficient in certain tasks than human soldiers. This gives commanders greater flexibility and options when planning combat operations.

In the quest for AI-powered military robots market to help with defense work, attention to the industry is growing. One company, Hanson Robotics, has been working on a trial program for their robot assistants in the Navy. Joining this group are other robotics companies who have been looking into developing AI robots as well. In January of this year, Toyota announced they would be investing $1 billion into artificial intelligence and robotics research. DARPA has said it wants to see 50% of military tasks performed by machines by 2030.

So what does all this mean for the military robots market? Since most defense work is manual labor, reducing cost and time spent on tasks would be an immense benefit. As AI becomes more refined, it will be able to analyze data more effectively and make better decisions – which could free up human resources for more important things. Additionally, smaller AI robots that can navigate complicated environments could help reduce casualties or increase speed in particular areas.

The possibilities are endless and there is no telling where the technology will lead – but one thing is for sure: Defense pros are going to need to pay attention if they want to keep up.

As per SkyQuest analysis of military robots market, in order to bring these benefits to market, manufacturers must overcome several challenges. The first is developing a stable AI system that can properly execute complex tasks. Second, manufacturers must ensure that the systems are safe enough for use in combat environments. Finally, developers must make sure that AIS systems are affordable and able to scale up production quantities.

Browse summary of the report and Complete Table of Contents (ToC):

Military robots are receiving a lot of attention as countries around the world become increasingly tense with one another. Countries such as US, India, China, and Russia have been investing heavily in military robots market in order to bolster their own capabilities, and firms such as DARPA are always looking for new ways to improve these machines. In fact, DARPA has already awarded contracts worth over millions of dollars to several companies in order to develop more sophisticated military robots.

This growing tension is likely responsible for the high demand for military robots market. Countries such as India, China, Ukraine, and Russia are keen on having these machines at their disposal in order to maintain security, and companies such as Thales Group, BAE Systems, Northrop Grumman Corporation, and Raytheon Technologies are eager to find new ways to improve them. This demand is likely to continue for the foreseeable future, since there is still a lot of room for improvement when it comes to military robots.

The United States is leading the way in developing and deploying these robots in the military robots market, with countries like Israel, China, and India also looking into their use. According to reports, the United States plans to have 10,000 robots in its military by 2028.

While these robots are seen as an efficient way to keep personnel safe, there are concerns that they may be used for more sinister purposes. For example, China has been known to use robots to conduct surveillance on dissidents and other unidentified targets.

Drones are one of the most popular type in the global military robots market. Drones are unmanned aircraft that are used for surveillance or combat missions. They are generally small and easy to operate, making them perfect for use in difficult environments. Drone technology has been rapidly evolving, and new models that are more advanced and efficient than ever before are being developed all the time.

Speak to Analyst for your custom requirements:

Top 5 Border Dispute that have Intensified Demand for Drones in the global military robots market:

As a result, manufacturers in the global military robots market are seeing substantial growth in sales. Vendors of these machines say that they are being used in a number of ways, including as scouts and surveillance equipment. They are also being used to carry out tasks such as bomb disposal and rescuing victims from disaster areas. 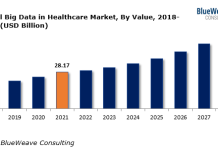 Global Big Data in Healthcare Market to Grow at a CAGR of 15.9%, during Forecast Period | BlueWeave Consulting