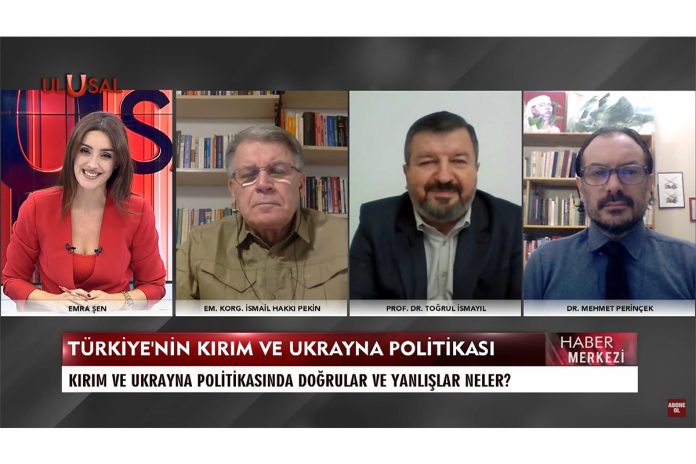 Regional geopolitics, balance of power and ongoing conflicts, resistance to globalism and Eurasian cooperation in the Black sea region were discussed in a talk show on Ulusal TV  hosted by Emra Shen.  https://youtu.be/0I0OpUN6Jv0  Experts presented their vision of the sovereign Turkish policies given the ongoing conflict between Russia and Ukraine and the growing USA presence in the region.

The former Head of Turkey’s Military Intelligence, Retired Lt. General Ismail Hakki Pekin made an emphasis on the broken balance of power in the Black sea region and the role of the NATO expansion: “The latest color revolutions have allowed to advance NATO forces to the Russian boarders. Turkey was also encouraged to put pressure on Russia in the Black sea, Caspian and South Caucasus regions. Yet, Turkey is not interested in a deterioration of relations with Russia“.

Professor Torgul Ismail added that the expansion itself was possible not only due to the cold war mentality that is still present in the international relations, but also because of Russia’s attempts to cooperate with the NATO in the 1990s, when it was in a deep crisis situation and in need for financial aid. “When Putin came to power, the priorities have changed”, he adds. Talking about peace and stability not only in the Black sea region, but in Eurasia, Prof. Torgul highlights the importance of cooperation between Turkey and Russia as strong neighbouring countries. “The current situation requires reinforcement of our own power and its demonstration. Anti-NATO conversations have become much more active now, as it has started causing problems”.

Historian and representative of the VATAN political party Mehmet Perinchek elaborated on the role of the USA and its aggressive policies aimed to implement the unipolar model: “Destabilization and attempts to change regimes to US-friendly ones have taken place in Georgia, Ukraine, Kyrgyzstan, Armenia, Azerbaijan. Eastern part of the Black sea region is chosen as a point of pressure on Russia that poses threats to USA dominance”. Turkey, in his opinion, is also suffering because of its critique of the unipolar system.

According to the experts, Ukraine is experiencing frustration and disappointment in their Western partners as they are not providing the full support that Ukrainian elites count on, and this leads to a shift towards China. Cooperation between Turkey and Ukraine shouldn’t be targeted against Russia.  Journalist Deniz Berktay continues: “The West is the key threat to cooperation between Russia and Turkey. The growing tension between Russia and Ukraine means that American ships will try to enter the Black sea again. Stability in the region is threatened”.

“Turkey hasn’t recognized Crimea as a part of Russia, but it hasn’t joined international sanctions against it. Now I want to ask if it possible to be in good relations with both, Russia and Ukraine. We have relations with Russia and relations with Ukraine – we should chose balanced policies and be a mediator”, the journalist concludes.

India Digital Banking Platform Market Set to Witness Prolific Growth: Projected to Grow at a CAGR of 9.8% by 2022-2028 | BlueWeave