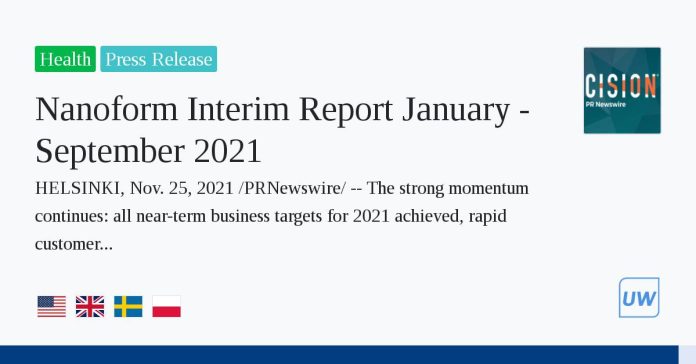 – EUR 40 million (gross) was raised in a new share issue in March.

– Early January, a new near-term business target was announced: “At least 12 new non-GMP and at least one GMP customer project in 2021”.

– In January, Nanoform announced positive interim results from its clinical study. The interim results suggested that a nanoformed oral piroxicam tablet achieved significantly faster absorption when compared to the reference tablet from the originator Pfizer.

– In February, a PoC agreement was signed with an East Coast US Biotech Company.

– In February, Nanoform announced further positive interim results from its clinical study. The fast absorption data from the second part of the study implied that nanoforming might offer viable alternatives to complex formulation approaches such as cyclodextrin based technologies.

– In March, a PoC agreement was signed with a European Biotech Company.

– In March, Nanoform launched the next generation of its STARMAP® artificial intelligence platform, v2.0. The technology utilizes sparse-data AI to augment experimental results from its CESS® nanoparticle engineering process with detailed expert knowledge, allowing reliable predictions to be made regarding partners’ potential success of nanoforming their drug molecules. STARMAP® is a digital version of the CESS® technology that enables in silico experiments in large quantities, creating fast predictions of which molecules should be nanoformed.

– In March, Nanoform appointed Dr Christopher Worral as VP Business Development US, based in San Diego, starting in May.

– On April 6, at the AGM, the Board of Directors, chaired by Miguel Calado, was re-elected.

– In April, Nanoform and Aprecia, a US-based three-dimensional printing pharmaceutical company, announced that they are exploring the synergies between their respective technologies in the field of nanoparticle-enabled 3DP dosage forms. The collaboration targets to combine Nanoform’s fast dissolution nanoformed particles with Aprecia’s ZipDose-technology platform for rapid disintegration to enable high performance buccal and oral delivery of medicines to patients where rapid absorption is essential.

– In May, Nanoform announced the completion and final results of its clinical study. The primary, secondary and optional exploratory objectives of the study were all met. The results showed that Nanoform’s CESS® technology enabled development of a fast-acting piroxicam immediate release tablet formulation with more rapid absorption and improved drug delivery performance in comparison to a standard reference IR tablet. The study outcome confirmed earlier published interim results and supports the clinical utility of Nanoform’s technology and its potential applicability for producing fast-acting dosage forms for poorly soluble drugs.

– In May, Nanoform and a US listed metabolic pharmaceuticals company signed a collaboration agreement.

– In May, Nanoform and Celanese Corporation, a global specialty materials company, announced plans to explore the synergies between their respective technologies in the field of nanoparticle-enabled drug delivery. The goal is to assess the utility of combining Nanoform’s nanoparticle platform technologies with Celanese’s VitalDose® EVA copolymer delivery technology for drug-eluting implants. The aims are to enable the development of next-generation drug delivery devices that support increased drug load and possess enhanced sustained release properties. Nanoform and Celanese intend to work on formulation development, leveraging each organization’s unique formulation expertise.

– In May, a PoC contract was signed with a new client, a US Biotech company.

– On June 2, Nanoform raised its mid-term business targets for 2025. The new targets are:

The raised midterm business targets were a consequence of several factors: the additional market opportunity foreseen for Nanoform’s new biologics technology, the significant interest in Nanoform’s service offering shown by the global pharma market, and the fact that both the number of companies developing novel drugs and the total number of APIs in the global pipeline continue to grow rapidly.

– In June, a letter of intent was signed with a European headquartered international company for the development, manufacturing, and commercialization of a by nanoforming improved version of a current blockbuster drug. The expected improvements will be focused on patient convenience. Nanoform has already started a PoC study on the asset, paid for by the partner, and are simultaneously in discussions for the execution of the definitive agreement for the further co-development and GMP manufacturing. The execution of the definitive agreement is dependent on the outcome of the PoC study and agreement on customary contractual terms with the partner.

– In July, a PoC contract was signed with a new global major pharma customer.

– In August, a fourth PoC project was started with a global major pharma customer.

– In September, Herantis Pharma Plc announced successful results from its project with Nanoform, where the aim is to enhance nasal drug delivery to the brain of Herantis’ CDNF therapies for Parkinson’s disease by using Nanoform’s proprietary biological nanoparticle technology.  The PoC project showed that the nanoforming process was successfully applied to rhCDNF. During the nanoparticle formation process, rhCDNF protein remained stable, retaining its structure, function, efficacy, and neuroprotective effects in line with CDNF controls.

– In September, Nanoform appointed Dr Nathalie Huther as VP Business Development Europe, based in the UK, starting in November.

– In September, Nanoform signed a contract for the implementation of a new enterprise resource planning system. The ERP system will be based on SAP’s S/4HANA solution and Nanoform’s partners in the implementation will be NTT Data Business Solutions, a leading global business and IT services provider with significant experience from the pharmaceutical industry as well as Enfo, a highly experienced Nordic SAP partner headquartered in Finland.

– In September, Nanoform announced that PoC studies will be funded by the Bill & Melinda Gates Foundation to assess the added value Nanoform’s CESS® nanoparticle engineering technology can deliver to several of the foundation’s drug development projects.

– On November 12, Nanoform announced that it had received ISO/IEC 27001:2013 certification for its Information Security Management System (ISMS). The ISMS applies to all information, systems, processes, and people that operate, store, handle, and process Nanoform’s and its client’s trusted data.

– On November 15, Nanoform announced that it had signed a GMP agreement with a European headquartered international company and that as six new non-GMP projects were signed in the third quarter, the near-term business target “At least 12 new non-GMP and at least one GMP customer project in 2021” was achieved.

– On November 17, Jeanne Thoma was appointed ordinary member of the Board of Directors at the EGM.

– On November 25, a new near-term business target was announced: “Biologics pilot line for GMP in 2022”.

Nanoform has continued to execute strongly. We’ve signed our first GMP customer project, while in parallel we’ve won many new non-GMP projects, both with new and repeat customers. We’ve continued to execute our GMP capacity expansion according to plan and continued to attract exceptional new employees from all over the world. Special effort has gone into expanding the GMP manufacturing staff, where we’ve introduced a shift work structure to be ready to serve significant customer interest and the two new GMP lines that will become operational during 2022. This will more than triple our GMP capacity for small molecules. In the Biologics domain we expect the pilot line for GMP to be ready in 2022.

During 2019-2021 we’ve diligently crafted GMP capability – hardware, software, and best practices by skilled operators – all part of the big, thoroughly regulated puzzle that takes time and significant investments to achieve. Today we already have some twenty nanoformers working in the GMP manufacturing organization and this is expected to grow rapidly during coming years. As the number of customer-APIs we’ve initiated PoC work on already exceeds two dozen – and should increase at least by 10x to more than 200 by 2025 – it is imperative that we build and polish our skills, processes, and most importantly quality as early as possible. I feel we have done a great job and are ready for a logarithmic step in the GMP manufacturing.

We are ready to take a similar logarithmic step in our IT systems and processes. After thoroughly evaluating five global ERP vendors and their IT service partners we chose SAP’s S/4HANA private cloud solution, with very experienced SAP partners NTT Data Business Solutions and Enfo as system integrators. SAP is a solution of choice for much of the pharmaceutical industry and this will allow Nanoform to simultaneously implement many of the best practices of the industry, while being aligned with systems and ways of working of many of Nanoform’s big pharma clients. A great early achievement was the ISO 27001 project, where we received the ISMS certificate a few weeks ago.

All in all, during the last months we’ve continued to expand and polish the different parts of Nanoform (R&D, non-GMP, GMP, pharma development, QC, QA, legal, finance, procurement, HR, IT, business development), continued to win more projects, sign new clients, add exceptional new Nanoformers and set a new near-term business target for 2022, after already having achieved all goals set for 2021. Based on all this action in combination with client interaction, sales pipeline, and our recently strengthened commercial teams in the US and Europe, I’m confident that the coming quarters and years will continue to show strong commercial momentum.

Again, none of this could have been achieved without our amazing employees and great partners. My sincere THANK YOU to you all for your continued dedication to Nanoform and for the inspiring and innovative work for which we’re known.

Nanoform’s complete 1-9/2021 Interim Report can also be found at: https://nanoform.com/en/financial-reports-and-presentations/

The company will hold a conference call and an online presentation on the same day at 3.00 p.m. Finnish time / 2.00 p.m. Swedish time. Nanoform will be represented by CEO Edward Hæggström, CFO Albert Hæggström and CCO Christian Jones. The presentation will be delivered in English.

The presentation will be broadcast live as a webcast available at: